Mi-24 Climb in to the cockpit like a real pilot! 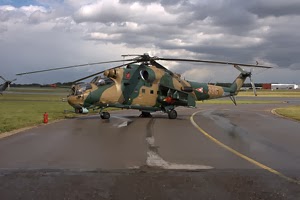 In the middle of the 1960s, while the western countries were looking the helicopter mainly as a transport and rescue machine, the Soviet Army look at them as the air counterpart of the battle tanks.

Heavy armed versions of the Mi-8 Hip were in service in those years when the Mil bureau start working in a new prototype called A-10 . This new helicopter, designed primary as an anti tank weapon began tests in 1970 and was seen for first time by NATO in East-Germany in 1972. The A-10 soon reached a speed record of 368 km/h  The first versions uses a standard helo cockpit with pilots side-by-side, but in 1975 would appear the Hind-D with the now traditional attack cockpit in a tandem configuration  Later versions, as the Hind-E , used the more sophisticated AT-6 Spiral missiles instead of the AT-2 Swatter and a 23 mm cannon replacing the 12,7 mm machine gun in the turret  In their better moment, more than 1000 Hinds were in service in the Red Army and they were extensively used in Afghanistan where they teamed with the attack aircraft Sukhoi Su-25 Frogfoot.