If your dream is to put on pressurized suite and sit in the cockpit of a real MIG-21 fighter like an ace? This is not a problem at Cold War Park!

An advanced version of revised construction with greater fuel capacity and updated avionics for multi role air combat or ground attack. Besides antennas, the main difference to the MF is the longer dorsal spine. 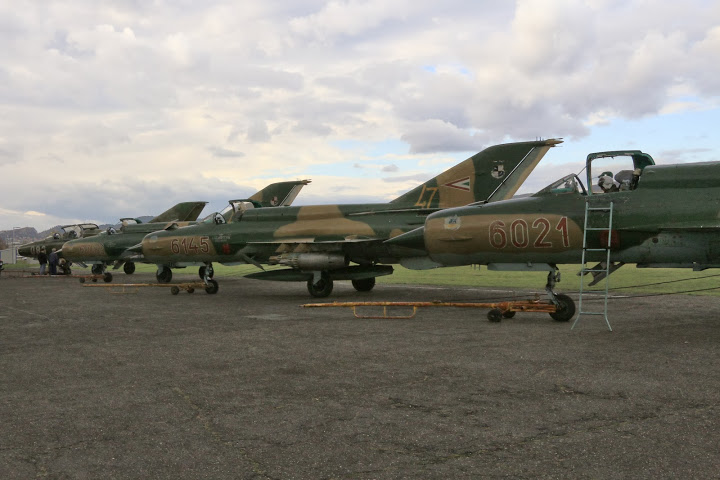 The MiG-21 is the most built jet ever. Fast, small, agile dependable and above all simple, it could be turned out in prodigious numbers, and was. It flooded the skies above Europe, Asia, Africa, and even Central America with literally thousands of modern, deadly fighters. It has flown in more wars than any other airplane in the world. An estimated 10,000 (some sources state as much as 13,000 copies) of them have been produced by the Soviet Union, it's allies and (without license) China. The MiG-21 is outnumbered only by WWII airplanes and in modern days only by one, the Lockheed C-130 Hercules. First introduced in service with the Soviet Air Force in 1959, it continued front line service for more than 30 years. A record equal, and parallel, to the McDonnell Douglas F-4 Phantom II. The operational record, now entered its fourth decade, may well extend into the next century with i.e. the Chinese and Eastern Europe Air Forces.

The MiG-21 is not known for its radar or hauling capabilities, nor for its target acquisition equipment or range, but its known that in many ways it was a pilot's plane. It doesn't have any computers or fancy navigation equipment. It very much depends on the pilot and his (hopefully) good training and experience. That, we all know now, was the MiG-21's Achilles verse in many of the wars it had to fight, and is responsible for the not so impressive combat records that it actually deserves.
A shock to Phantom pilots when it arrived in the skies over Vietnam, was overcome by superior USAF training and a change in rules of engagements.

The MiG-21 proved itself over and over as a formidable dogfighter against the heavier American fighters which was another reason for the success of the MiG-21. Its reliable engine, easy maintenance, rough field capabilities, and save flight characteristic made it the most successful jet aircraft of all times.